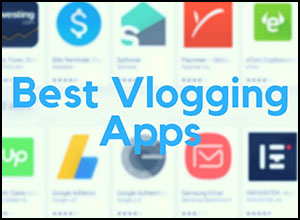 Let’s face it: vlogging is tough!

We’ve all read those condescending profiles about millennials and their habit of pointing cameras at themselves for a living.

But has anyone actually tried to make a vlog filled with attractive content that people actually watch and share?

It takes many hours and a lot of thinking to create just one video to post on YouTube.

But using the right vlogging app can save you a lot of time.

So here they are, the six best vlogging apps for your smartphone:

Before you run, you have to learn to walk. Apple’s Clips is the absolute best way to quickly transition from raw recordings to professional, clean edits ready for your blog.

The reason this simple app is worth recommending is because it is easy to use without sacrificing functionality.

The most interesting feature, though, is the ability to flip on automatic subtitles. Many fully-featured video editors for your smartphone don’t include this powerful tool. That’s why Clips is still a key tool in any vlogger’s suite of apps.

Cinema FV-5 is an app geared towards professionals. It turns your smartphone into a much more powerful vlogging tool than your default video recording app could ever be.

Among the key features that will catch any vlogger’s eye are:

You’ll have a keen level of control that many similar apps don’t provide.

If your vlog style is generally a single, uninterrupted cut, the free version will succinctly cover what you need:

If your style is more about complex edits, the paid version adds in the additional utility you need. It’s mainly about simple cuts and fade-ins, but that kind of restraint is usually what a good vlog needs.

The strength of this tool is in the access to Magisto’s library of soundtrack content. Often, the little boost a great vlog needs to get that extra professional feel is a bit of subtle music. But the most popular video upload sites, not least of all YouTube itself, will take down content that breaks copyright. Using Magisto’s offerings gives you a pleasant backing track with zero fear of having your vlogs taken down.

Vlogging is something of a blank slate, conceptually. The best vloggers ad a specific point of view to their work that you can’t find anywhere else. With that in mind, we’ve mostly brought up apps with broader purposes than vlogging alone.

Vlogit is an exception to that rule. Rather than pigeonholing vloggers with features that homogenize their output, Vlogit’s approach is to pile on useful features that give ample opportunity for creativity.

It makes all the following a simple process:

Then, you upload straight to YouTube, your vlog fully formed.

It’s also a cinch to get your existing content involved. Want to make a quick two second callback to a previous vlog? You can scrape your videos from YouTube or Instagram and pull out the clips you need, painlessly. Are you making a response vlog to another vlogger’s content? Pull their video from YouTube and weave in the material you need, without even leaving the app.

This powerful app gives you full control over your uploads, analytics, and comments. It’s the nerve center of any YouTube-focused vlogger.

As an example of how experienced vloggers use this app: you notice that a seemingly solid video is underperforming. Taking that information, you decide to change the thumbnail to angle for better engagement. Then you take some time to reply to comments that did make it to the video, keeping your viewers invested in your channel. All without leaving the app.

For vloggers looking for a quick path to making their videos stand out, FXGuru is a great choice.

This app does a a lot of simple and unique things altogether:

That isn’t to say these aren’t good effects! These are professional quality action and sci-fi effects that insert explosions, laser effects, and all sorts of silliness into your scenes effortlessly. All you have to do is use the included layout assist tools to frame your vlogs appropriately to insert the effects.

When you want your vlog to definitively stand out from the crowd, you can’t do much better than FXGuru.

Get Your Vlog Started Right

Now you have an idea of the types of apps to focus on when building the raw content to fill out your vlog. In addition, you’ll want to make sure you have the right hardware for the job, as not all smartphones are created equal!

While the ceiling for professionalizing your vlog is limitless, it doesn’t take tens of thousands of dollars in specialized equipment to get started on the right foot. Survey the apps recommended above, pick and choose what’s right for you, and build your vlog into a powerhouse from there!