The next addition to the EOS series of Canon cameras after the 70D is the 80D, a higher mid-range DSLR camera that makes for a solid camera for semi-professional to professional vlogging.

If you’re currently rockin’ a low-end camera and want to make the jump to a more professional setup, this could be the camera for you, as long as you’re willing to shell out the dough for it. It’s not insanely expensive, but it’s definitely not on the cheaper end of things, especially compared to similar DSLRs. 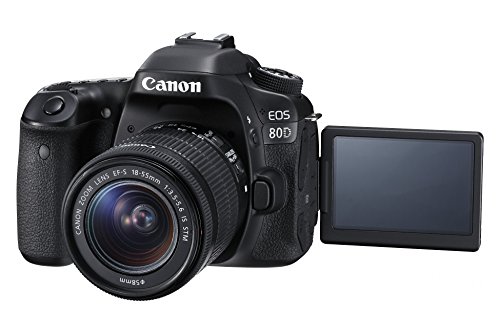 24.2-megapixels and an APS-C CMOS sensor drive the core of the 80D. Although 4K video escapes this model, it can still shoot 1080p at 60 frames per second, and with compatibility with Canon’s entire line of EF and EF-S lenses, there’s plenty of options to choose from. And, of course, there are myriad third-party lenses to look at as well, for even more choices of lenses to suit your needs.

Improved auto-focus modes that work better than the AF modes on the 70D uses Dual Pixel CMOS auto-focus technology and it’s as speedy and as accessible as ever. A simple tap on the touchscreen keeps the subject locked in as the target of your video. It’s smooth and silky auto-focus thanks to this upgraded AF tech.

If you’re unaware of Canon’s Dual Pixel Auto-Focus, it splits pixels on the sensor, then each divided pixel senses light coming in from both sides of the lens. This information is then used to focus in on your subject. Great auto-focus, such as what this camera offers, makes shooting moving subjects (such as yourself) a cinch.

With the auto-focus also comes auto-white balance and auto-ISO. For those who need or simply just want the assistance of the aforementioned aids to make things easier, these are wanted additions. When it comes to codecs, you’re limited to MP4 and H.264, which shouldn’t be a problem for most vloggers.

No Light, No Problem 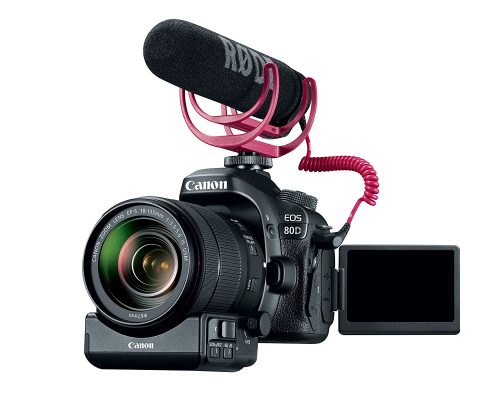 Equipped with a hot shoe also, you can attach a small lighting attachment —or microphone— on the top of the camera if you’re in extremely dark environments or just want more attention on your subject. This helps out even more with low-light situations such as night shoots. Even though this camera shoots low-light pretty well, there’s only so far you can take it before your video starts to look like a movie from the late-1800s. 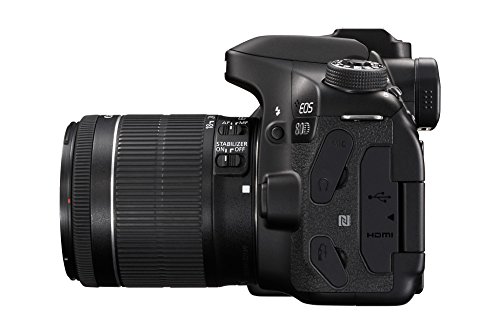 One of just a few cameras that offer an HDR (High Dynamic Range) video mode, this feature shoots two videos at once at different exposures and then composites them together afterward using a smart sensor, creating a video quality that has intense depth and color quality. This outputs at 30fps, not 60fps, but that’s the norm for the Canon line of DSLRs.

The 3” 1.04 megapixel LCD touchscreen is fully articulated, which is a useful tool for shooting video in a variety of environments and positions. Like other higher-end Canon DSLRs, the screen is also coated to minimize smudges and manage a clear LCD image display even under intensely bright conditions.

The touchscreen is very responsive, too, practically feeling like using a brand new smartphone. Considering the many functions available via the LCD screen, this is a big plus. There’s nothing more frustrating than dealing with a wonky, unresponsive touchscreen, having to punch it just to get it to execute the function that you want.

The EOS 80D is another Canon DSLR with the Live-View feature, which displays what the video will look like if you were shooting with all the settings in effect, a type of visual simulation, so to speak. It’s a helpful feature to get a glimpse of the end footage and it’s especially useful to more novice vloggers, as it takes the mystery out of what will turn out as the final product. 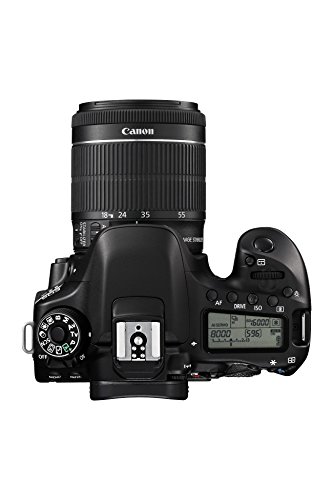 Although it’s about 5% lighter than the 70D, it’s about average on the weight and size scale when it comes to similar DSLRs. With this in consideration, it’s nice to see the battery seemed to have quite a large lifespan.

When speaking about portability, good battery life is essential, unless you plan on shelling out cash for spare batteries or hectically searching for electrical outlets if you’re travel vlogging. There’s also a power saving mode with adjustable time settings.

For vlogging from a grounded tripod, the 80D’s wireless control comes quite in handy. Via the Canon Camera Connect app, you can, from your phone or tablet, operate and monitor the camera remotely, making the need to get up and head over to your camera for adjustments unnecessarily.

And it’s not just video that’s important for an engaging vlog that’ll get your audience clicking the subscribe button without hesitation; it’s audio! This camera has an external mic input, so you don’t have to suffer from mediocre internal microphone vocal quality. Get a separate mic and hook it up for clear, clean audio.

Along with Wi-Fi, it also has built-in NFC for smartphones, as well as seamless uploading onto social media outlets if your vlog doesn’t need any editing. This is executed through the CANON IMAGE GATEWAY.

Despite its price, the Canon EOS 80D is a solid DSLR with a few new features from its predecessor. It most definitely can be used professionally, and if you’re new to vlogging and can afford it, or you want to take your vlogging game to the next level, it’s definitively worth considering a purchase. But as an upgrade for the 70D, it comes with just a few new features. It’s not quite worth the upgrade if the 70D is already in your photographic arsenal.