Is the Canon EOS M50 the New Best Vlog Camera?

What Vloggers Can Expect From the Upcoming Canon EOS M50

Canon finally caves in to join the 4K video pack with the launch of its latest entry-level mirrorless camera, the Canon EOS M50. Coming this March, this new offering from Canon contains new and improved features that vloggers will find exciting.

Aside from the ability to capture video in 4K, the Canon EOS M50 is an upgrade from its predecessors in the M-line of cameras with its improved sensor, increased AF points and a fully articulating 3-inch LCD screen.

Noting the success of the Canon Powershot G7X Mark II, the current popular choice of camera among vloggers, Canon might have set out to create the M50 as a better vlogging camera.

Let’s find out if it really is.

Can the Canon EOS M50 Replace the G7X Mark II?

The Canon G7X Mark II is incredibly popular between vloggers. The reason is simple; it has almost all the features you would need to record a high-quality video blog: flip screen, small size, lightweight, great image quality, decent low-light performance.

However, it still lacked some features that the Canon EOS M50 hopes to fix, although not for free.

Here’s a comparison table of the key vlogging features each one offers:

Differences between the Canon EOS M50 and the Canon G7X II

The main advantage that the M50 has over the G7X Mark II is that this new model has both an external microphone port and a hot shoe for shotgun microphones making the M50 a great companion for vloggers who value good sound quality.

But there’s a catch though. Since the external mic port is located on the left side of the M50’s body, the same side where the LCD screen flips out to, your mic’s chords might end up obscuring your view of the screen a bit when you’re shooting.

The Canon EOS M50 also benefits from having a bigger sensor than the G7X Mark II while only weighing a few more ounces. The M50, which weighs just two ounces more, has an APS-C sensor that is 65% larger than that of the G7X’s, which makes it better for low-light situations and Bokeh effect among other things.

What more, the M50 can be more versatile and adaptable to different shooting situations as it can accommodate more lenses than the G7X which has a fixed zoom lens. 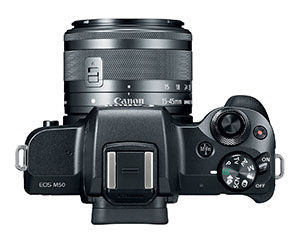 4k Recording in a Small Package

What serious vloggers will find most exciting about the M50 is the camera’s ability to capture video in 4K. Having the means to shoot 4K will enable you to provide the best possible video quality you can to your viewers.

Seems great, right? But there’s a catch. Shooting with the M50’s 4K mode will add an additional crop factor of 1.6x on top of the crop factors that APS-C cameras have. This is not the biggest deal and not something vloggers should worry about on its own. But besides the image ending up a bit more zoomed in when using 4k recording mode, you won’t be able to use Dual Pixel Auto Focus either, which is the system that helps the camera track the correct subject during video recording.

This means that you might end up using the 1080p60 recording mode anyway if you need to rely heavily on the autofocus.

You will need a lens with image stabilization for the M50. The good news is that the kit lens has the stabilization and the 15-45mm is especially useful for vlogs.

How does it work?

Since the 4k recording mode adds a crop factor, the camera uses the part of the image that is cropped for digital stabilization of any vertical and horizontal movement (5 axis).

This means that this camera is especially stable with the kit lenses and in 4k recording mode.

Still, going through these specifications, it’s obvious that the Canon EOS M50 has all the hardware needed to exceed the Canon Powershot G7X Mark II as the leading camera for vloggers. But it still has its shortcomings being an entry-level camera. It is also a bit more expensive.

What New Features Does the Canon EOS M50 Have? 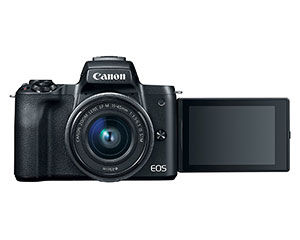 The external mic. port is located in front of the screen when it’s flipped. The cord will partly cover the screen.

The Canon EOS M50 is part of Canon’s M-series of mirrorless cameras. It sits somewhere between the M100, an entry-level camera, and the EOS M6 which is marketed as a mid-range mirrorless camera.

Understandably, the M50 shares some similar features from other cameras in the M-series. For one, it has the same silhouette as the M100 just a bit beefier. But it also offers a lot of new amazing features for shooting better video.

Aside from being able to shoot 4K video (although cropped), the M50 is also the first camera in the M-series to have an electronic viewfinder (EVF) which can be useful if you’re shooting brightly-lit scenes which could make the LCD screen difficult to see. This comes at the cost of a shorter battery life though as EVF’s are known to deplete battery life quite easily. Case in point, the M50 has a relatively shorter battery life than other M-series cameras.

The Canon EOS M50 is also the first Canon camera to use the latest Digic 8 processor which promises to provide better quality visuals and an added eye-detection AF feature which might be helpful for vloggers who often appear in videos with other people.

Canon also debuts its Camera Connect App with the M50. The app will allow you to easily copy your files from the camera directly to your phone for faster uploading to social media.

Overall, Canon did well with making the M50 as a better vlogging camera choice over the current favorite, Canon Powershot G7X Mark II and improving on its M-series of mirrorless cameras.

Although it has pitfalls such as the added crop factor at 4K and a short battery life, the Canon EOS M50 seems to be a worthy contender for the best vlogging camera right now. Perhaps we’ll only know for sure once it becomes widely available this month.