Is the Canon VIXIA/LEGRIA HF G40 Good for YouTube?

Camcorders aren’t usually considered often as a main source of shooting video in general when it comes to YouTube videos, especially vlogs. There are a few reasons why.

For one, camcorders have extremely small sensors — even smaller than compacts. This makes them really bad for low-light recording.

And on the other hand, you have DSLRs and mirrorless. They provide great video quality with extensive lens interchangeability.

So, then why use a camcorder for your YouTube videos?

Simply put, they are inherently built for shooting video for long periods of time. Other types of cameras are not only limited to 29-minutes videos, they also can overheat if you use them for too long. Camcorders are the best option if you really need to spend hours recording, although it’s rare to find a Youtube channel with this requirement.

The Canon HF G40 was inherently built for shooting awesome looking video. Its weaknesses as a camcorder aren’t as pronounced as cheaper competitors, so it might be the best camcorder at the end of the consumer line. Let’s take a closer look at this beast of a camcorder.

Yes, camcorders generally have smaller sensor sizes than similarly priced DSLRs. However, the G40 boasts a 1/2.84-inch sensor, the HD CMOS PRO Image Sensor, the biggest in its class. This not only means great depth of field; it means better video quality in low light environments.

Topping out at 1080p/60fps at 35Mbps, the G40 produces high-quality video at the top of the YouTube video quality chain. 4K is nice for vloggers, but for audiences, owning a 4K TV or monitor is still somewhat of a luxury. Still, bear in mind that there are cheaper cameras with bigger sensor and 4k recording out there.

I don’t know when you’d want to use the 400x digital zoom (that would be incredibly noisy), but 20x optical zoom ain’t too shabby. It also accompanies a lens with a focal length of 3.67-73.4mm. 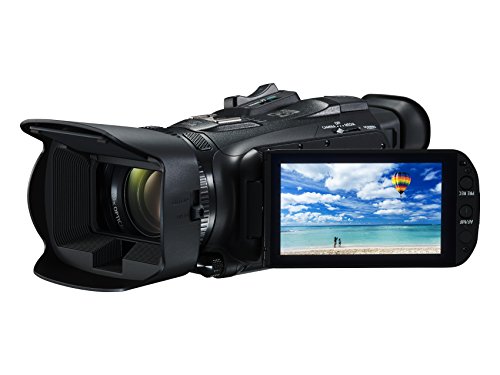 The biggest thing that sets this camera apart from others in its class is the plethora of manual shooting options. You get full control of the shots you want, but several auto-shooting options are still available if you yearn for something a bit easier to set up and start shooting right away if you’re still a novice videographer.

Along with those options are five “Assigned Buttons” which are completely customizable. You can assign any function you want to whichever button you want. It’s almost too good to be true when it comes to customizability.

Built-in to the G40 is a unique “Looks” preference that consists of a Highlight Priority Gamma mode, which is a type of HDR-like mode for making compressed videos retain details other cameras would decay under the same compression. The Wide Dynamic Range Gamma mode allows your video to capture a wider dynamic range as well.

Great optical image stabilization aids the frustration of what happens aplenty with handheld cameras, and that’s unwanted shakiness. The image stabilization works across all zoom levels. And let’s not forget the autofocus modes: Instant AF, Medium AF, Normal AF, and Face Only AF.

So, as much as this camcorder offers in terms of manual operation, it has extensive auto options for exposure, white balance, and autofocus. The G40 shoots great for professionals who want ultimate control as well as less experienced YouTubers with the array of automatic functions. 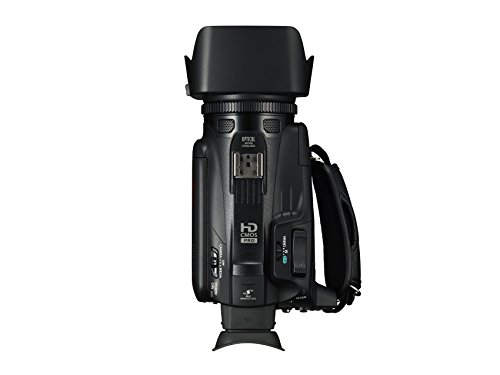 The 3.5” OLED screen comes with the assistance of an electronic view finder that has incredibly crisp detail. Though the screen is not variable-angle, it tilts 45-degrees, and the touch sensitivity is superb and is the host of many pertinent video functions.

The G40 contains 2 SD card slots. With the Relay Recording mode, once one of the cards runs out of space, it’ll automatically switch over to the other card, continuing the recording without pause. It’s a nice feature to have if you’re planning on longer shoots and Canon maintains that when shooting with two 32gb flash cards, you can record 5 hours and 50 minutes of continuous video.

Built-in to this camera is transcoder functionality, which allows you to convert AVCHD videos into MP4 videos internally. That’s pretty neat and a great plus in the portability realm; no computer needed if you’re on location.

After transcoding to a smaller video size, you can use the Wi-Fi functionality on the G40 along with the Canon Movie Uploader app, if you have an iOS device, and you’re uploading your videos to YouTube without even having to go home, let alone touch a computer. That’s just another solid perk of the G40 for on-the-go vlogging.

Regarding audio, the G40 comes with an external audio input along with a headphone terminal, for accurately monitoring sound. It’s basically expecting at this price, but nonetheless, Canon doesn’t disappoint.

Video wise, an HDMI output allows you to preview your videos on a larger monitor before you decide how to edit your video on your home computer or laptop.

This isn’t the lightest camcorder at 1.7lbs, but it also isn’t the heaviest. It has a hearty, sturdy build, and comes with a lens hood and a grip belt.

It has remote-controlled functionality, too, if you want to set this bad boy up on a tripod and not have to get up after every take, flub, or long-range selfie shot.

It’s a prosumer camcorder, sitting amongst both the professional as well as the consumer category of camcorders. With manual settings and automatic settings both readily available, it’s an incredibly versatile camcorder at a price-point that’s pretty satisfying.

Sony a6000: Is it Good for Vlogging and YouTube Videos?

Fixed the typo, thank you Blayde!

I use my Legria G40 for YouTube videos all the time, set to 1080 50p 35Mbps. Apart from the picture quality, it is the programmable buttons which really make this so versatile. Without going into the menus I can instantly switch between auto/manual focus, auto/manual exposure, and switch on and off wide dynamic range, optical stabilization, and dynamic stabilization. The only downside, which seems to be common to Canon camcorders, is that if you power off, when you turn it on again it defaults to auto exposure even if switched to the manual mode.