The Canon line of VIXIA HF R-series (Legria in other countries) consumer cameras has always been well received from those who want the functionality of a full-fledged video camera at an entry-level price.

Canon’s most recent entry in the series is the HF R800, following up from the R700. Although only a few things have been updated since the last entry, the R800 is still the best in the line, all things considered. However, it is more pricey, and the new price difference might not reflect in quality.

Since one of the most popular cameras between our readers is the R700 and R72, we could not let pass the opportunity to review this camera. Let’s see if this is one of those updates that are well worth it, or simply something you shouldn’t waste your time on.

Is a Camcorder for Vlogging a Good Option?

Choosing a camcorder for vlogging can be a good idea since video is your main concern. DSLRs might be a popular choice among vloggers because of their high quality and larger sensor. But if you’re on a budget, you can save good money by choosing a camcorder that can still record 1080p video with good quality. This is a good choice especially if you don’t think you will be using your camera indoors or in low light.

The combination of simplicity, a quite rich feature set, and an excellent price-point make the R800 a decent option for new vloggers. For the intermediate vlogger, it makes for a great backup camera or an easy choice to take along on a road-trip or adventurous excursion, when you’d rather leave your main $2000+ video camera safe at home. 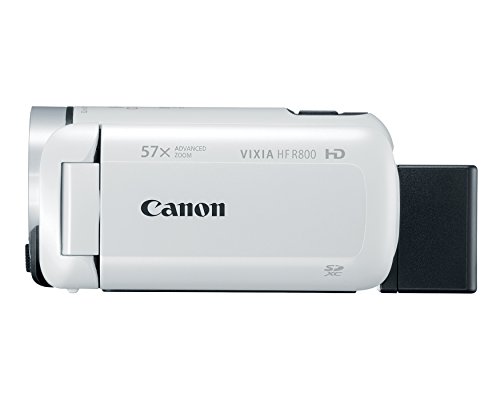 The R800 shoots only in MP4 video format, which may detract those looking for a higher quality compression method. However, it can shoot 1080p video at 60fps and at a bit rate up to 35Mbps, which honestly is more than enough if you plan on uploading your videos to YouTube.

The R800 uses the same image processor used for Canon’s DSLRs the DIGIC DV 4 Image Processor, which is a nice implementation. It’s a good processor and does a great job at cutting out extra noise from the sensor’s image signal. It still is a camcorder with a small sensor though, so image noise will be inevitable for low-light recording.

The touchscreen LCD monitor is 3”, which is about as small as they come on a camcorder, but it’s still adequate for getting a good grasp on the visuals of your shot. Most of the extra functions are only available on the touchscreen, as there are hardly any physical buttons on the R800, simply the zoom trigger and the record button. 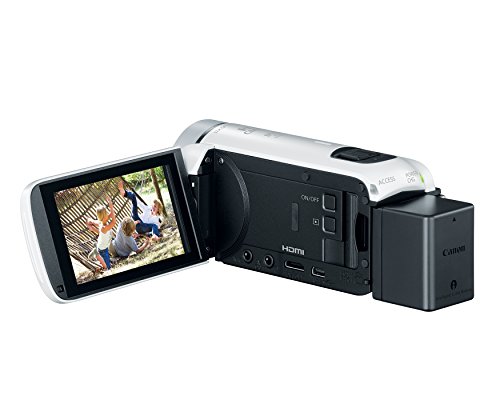 There’s nothing wrong with this, as it makes “pick up and shoot” meaningful for this camera. Novice vloggers won’t be confused and overwhelmed with a ton of buttons and knobs on the body. It’s a great starting point for shooting video.

An external microphone input helps the audio quality of your video if you choose to use a mic, and I always recommend that option. A headphone jack allows adequate monitoring of your audio levels, whether using an external mic or not. This is great to test your audio out there on the field, even in a noisy environment.

Along with a 3.82-megapixel sensor, this camera fully impresses with its 32x optical zoom, which looks much better than a traditional digital zoom where video noise can get terribly out of hand. Still, zoom isn’t your main concern as a vlogger, so I’m just mentioning this as a small plus to owning this model.

A Friendly Camera for Family Vloggers

Canon seems to have targeted a specific group of consumers with this camera, and that is the family unit. If daily or weekly vlogs of your family’s adventures strike your fancy, this could be a great purchase.

For one, the File Lock function, when enabled, disables destructive actions such as editing and deleting videos. This is a great function if you’re going to have kids playing around with this camcorder and don’t want to leave anything up to chance.

Another function in the same territory is Baby Mode, which has also been offered in previous R-series models. Via touchscreen controls, you can create a baby album, chronicling multiple children’s’ growth with videos and time stamps, among other information.

Coming in at about half a pound, the R800 is insanely light, making it perfect for travel vlogs or simply keeping it in your bag if you never know when you might need it. Although it’s too big to fit in your pocket, it’s light enough to carry virtually anywhere, with no arm strain with longer shots.

I love the idea of using this camera as a backup for when you need to record outside during the day. Having a DSLR for indoors and this one to take anywhere is a combination I love.

There’s no internal memory, but the R800 supports up to 128GB SD, SDHC, SDXC, and Flashair memory cards. There’s no SD card included in the box, so you’ll need to make sure you have a memory card in order to shoot right away.

According to Canon, shooting 1080p at 35Mbps will fill a 128GB card in 8 hours. I would definitely recommend a 128GB card, as memory cards are always coming decreasing in price, and you will never have to fret about running out of space. Shooting at lower resolutions, you’re capped at a 12-hour limit of video length, though the camera will automatically start a new file for uninterrupted shooting.

As usual, Canon released three version of this camera with different variations. The HF R800 is the most basic one:

This is definitely not a worthy upgrade if you already have the R700 or R72, but for newcomers, it still represents one of the first options you should consider for video blog recording.