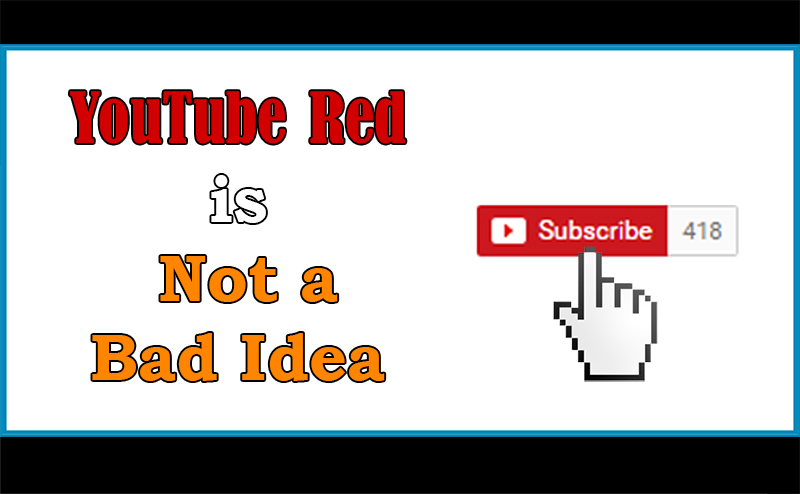 After Google announced their new YouTube Red subscription idea, everybody went mad. How could they charge $10 monthly to watch amateur videos? Well, YouTube Red has been completely misunderstood from the beginning. Here is why you should stop thinking YouTube Red is a bad idea.

Why Does People Think YouTube Red is a Bad Idea?

Well, most people think they’ll have to pay to enjoy videos on YouTube. This is not true.

Of course you won’t need to pay to see amateur videos on YouTube. Everything will be as it was before if you don’t pay anything.

What YouTube Red does is getting rid of ads. That’s it. If you don’t pay it, you will still get the same amount of ads. However, if you do pay, you won’t see more ads popping up on the videos. It’s that simple for watchers.

Now, if you’re a YouTuber, you might be worried about not getting paid for showing ads.

Keep reading and you will find out if you should really be worried about it.

A lot of YouTube videos are monetized by showing ads. This the only way YouTube has been paying creators to upload their videos. Normally, YouTube takes 45% of the ads revenues and the rest is for the channel owner.

Now, the main problem with this model is something called Adblock.

Just like its name suggests, this software blocks ads from appearing on the web. This includes YouTube videos, so Google and YouTubers lose a lot of money because of this.

If an ad is not showed, it does not generate any revenue to publishers.

There are 198 million adblocks users around the globe. And this is not all, it keeps having a growth of around 40% every 12 months.

This is getting out of control, so it’s just natural companies are starting to look for ways of keeping their business model profitable.

This is exactly what Google is trying to achieve.

YouTube will keep 45% of the money Red users pay to subscribe. However, the remaining 55% will go to a big pot that is going to be distributed to YouTubers based on their channel’s total watch time.

This means that the channels with more subscribers will naturally get a bigger part of that money. Every YouTuber will get a chunk of that pot based on the success of their channel. Everybody wins.

This idea will make all revenue more stable for Google and YouTubers.

If you’ve ever thought about starting a YouTube channel, this is the best time to do it. New channels will have a guaranteed income. This is something totally new.

Before, ads revenues depended on the industry, target, watcher’s location, total ad watch time, etc. Some video channels were really screwed if their videos had to show ads from low-competition industries.

Now YouTubers have an assured income from YouTube Red subscribers. This makes being a YouTuber a more stable profession.