The Canon PowerShot G7 X is a vlogging camera used by many successful YouTubers. Since its price range is quite high, this camera is aimed at more serious vloggers that want their videos to improve a lot in image quality. This -among others advantages we’re going to see in this post- is the reason why it’s so popular between famous vloggers.

Why is the Canon PowerShot G7 X a Good Camera for Vlogging?

Speaking only about that it can record at a maximum 1080p60 doesn’t say much about the G7 X capacities. See, most Point & Shoot cameras can already record video at this resolution and frame rate.

What makes the G7 X so great is not that it records 1080p or that it takes 20.2 megapixels pictures –which is a lot MP, but it really doesn’t matter for video. Instead, it’s thanks to a combination of things. 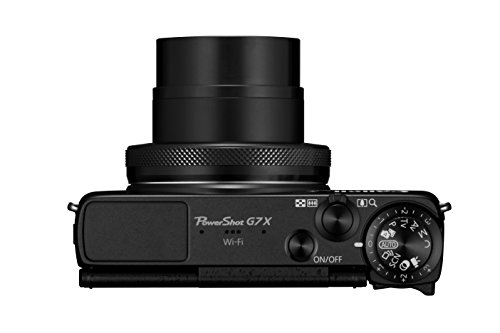 It’s the kind of compact Point & Shoot that professional photographers like to take to their trips when they don’t want to carry all their heavy, bulky gear. This can give you an idea of how good this camera can be.

It’s not easy –believe me- to convince a professional photographer not to take to a family trip their DSLR with battery grip, 4 lenses, tripod and their set of 10 different filters.

Still, this camera does the job for those that want to sacrifice some versatility for a really comfortable high quality camera.

From sharp colors and image detail to manual controls, fast aperture, large zoom, low-light performance and built-in flash put this camera on the professional level even though it’s a compact, and photographers just love it.

The Canon PowerShot G7 X is an amazing camera, but why would a serious vlogger buy it?

What Makes the Canon PowerShot G7 X Good for Vlogging?

We’ve already know that the camera records amazing video and takes really high quality stills. However, what makes it an excellent vlogging camera is a combination of other features.

You will find that there are only two major downsides about using this camera to make video blogs, but there’s a workaround for both of them. 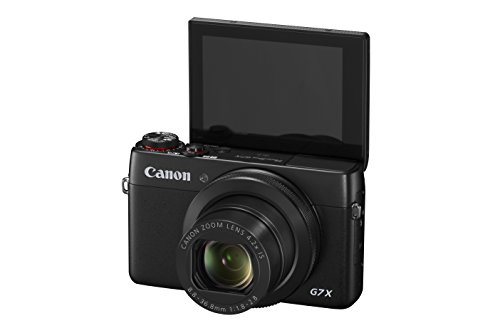 I’ll tell you about them at the end of this post.

For now, let’s take a look at the bright side:

The Canon PowerShot G7 X is one of the best cameras for Vlogging if you need to take it to a trip or elsewhere. Being able to record video like if it were a DSLR -in terms of image quality and manual mode- without the additional weight is the main reason to buy this camera as a vlogger.

It’s simply like having a truly portable DSLR you can fit in your pocket -although this is not the most comfortable way to carry it around.

You can take get the result you want by using its manual exposure mode while capturing really high quality image.

It offers just what daily vloggers are looking for: the best quality possible for the less carrying weight. It’s a combination of power and luggability.

Now, its size and recording quality are not the only advantage vloggers can take from it. There are three additional features that combined add a bunch of value to vloggers: touchscreen, flip screen and autofocus system.

Each one of these are useful on their own, but in combination, they make the G7 X a vlog-friendly machine.

The touchscreen allows you to navigate fast through the menus, but it also lets you to set a focus point while you’re recording your videos. Combine this with the flip screen and you got a way of making sure you are always focused by the camera when you’re recording yourself.

One of the things I like a lot about it is the AF touchscreen. Just press the touchscreen and the camera will smoothly focus where you want it pretty fast.

The autofocus system is overall fast and precise.

Additionally, with the G7 X you got the option of using it in full manual mode. This lets you choose lens aperture, shutter speed, and ISO to achieve the result you want for your videos.

Another good thing is that this camera will make good material out of vlogs you record during the night; its performance in low light is better than most compact cameras. Its 1 inch CMOS sensor does a really good job in high ISOs, which makes it possible to achieve a cleaner image without so much noise. It is indeed one of the cameras I would recommend if you want to record a lot of videos at night.

Finally, one of the most important things about the G7 X is that it has optical image stabilization. This is extremely important if you want to record while walking, which is pretty common for vlogging. This is why you can walk around with the camera without the video feeling too “shaky”; it helps getting a smoother result.

The camera includes other features that improve its performance when taking stills like ND filter and HDR mode. However, what I explained are the main advantages you will have for vlog recording.

Now let’s talk about the two downsides I mentioned earlier.

What Are the Downsides of the G7X?

Let’s cut to the chase: the two downsides are low battery life and the lack of an external microphone port.

As you can see in the camera’s specifications, its battery can last for around 75 minutes of continuous shooting, or 210 shots. This is below the average of large sensor compact cameras (average is 311 shots). 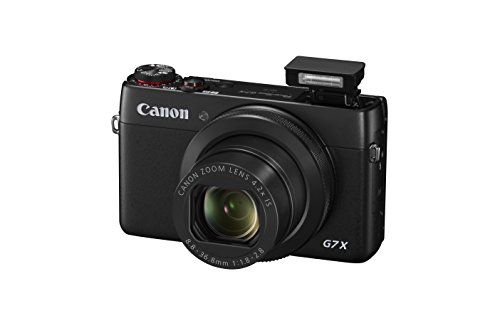 Now, about the second point, the lack of external microphone port is just a shame. However, most vloggers just like to take their camera out and record their day without caring too much about using the built-in mic.

In case you want to improve your audio (its built-in microphone is just as low quality as any other camera’s, although there are worse mics than this camera’s), you will need to get a portable recorder and connect a lavalier microphone to it.

Another much cheaper option is using a lavalier mic to connect to your smartphone, record audio with it while you record the image with the camera and syncing it later during the edition process.

If you want to find out what microphone to use and their price, I’ve put a list of the best microphones for vlogging here.

This is certainly more money to spend and more work to do, so some YouTubers that have this camera just use the built-in microphone. Just bear in mind you will need to evade recording when the day is windy because it will catch some noise.

Since one picture can say more than 1000 words, here’s a vlog that was recorded with the G7X:

Final Thoughts (Any Question? Ask me in the Comments)

This camera is all about recording really high quality image, having accurate and fast autofocus, luggability, flip screen, WiFi, and even fully manual mode if you want it —although auto mode will be enough for the average user. It’s just a lot of value for vlogging in general.

You can see why it has become popular for YouTube vlogging. Even though it lacks a microphone input, it does record fairly good audio. You can rely on its microphone for most situations; just know that it will always be better to have an external microphone.

Some people simply get a good external recorder and a microphone to achieve better audio if they want it.

If you just plan to be recording in your house for most of the time, consider the Canon Rebel T6i. It is heavy but you can upgrade it later by getting a better lens.

In the end, this camera is a great option for this kind of job, and its new version released in 2016 has improved a lot of things without making it much more expensive.

Have any question? Be sure to ask in the comment section. You will usually get an answer from me within 24 hours.