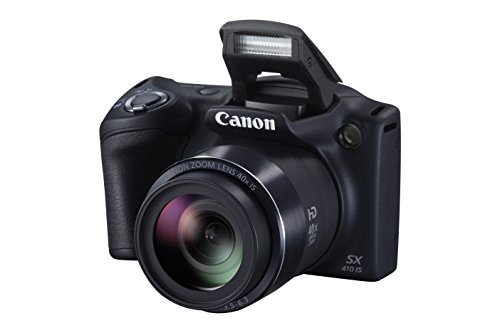 Every point & shoot camera below $200 has a lots of flaws, but they can help you get started with vlogging. This is the case with the PowerShot SX410 IS. Although it lacks a lot of features and could have better performance, it gets the job done. Here is why the PowerShot SX410 IS is good for vlogging starters.

Before starting, you must understand this:

This camera is only worth getting if you have an alternative way to record audio. If you plan to use the camera’s built-in microphone, you should reconsider it.

Using a built-in mic for vlogging is not good at all. There are cheap microphones out there that are pretty good for vlogging. Make sure you record your audio with a USB or portable mic when you use this camera.

Now, let’s start with the review.

Why is the PowerShot SX410 IS Good for Vlogging?

It’s one of the few with manual focus at this price range – Most video blogs don’t need you to have a good camera with autofocus. In fact, if you don’t need it, using manual focusing is better; this way you can make sure you’re being focused at all times. Just set the focus to where you will be speaking and you can stop worrying about getting out of focus.

Despite this camera’s lack of an articulated screen, you won’t need it anyways if you use the manual focus.

Its video quality for the price is really nice – This is a really cheap camera that can record cinematic 720p video. It is highly valuable to be able to record nice video at this price range.

It really isn’t a bad vlogging camera to start with, as long as you use other way to record audio.

It has an amazing zoom for the price (x40 Optical)– Although most vlogging channels won’t find this very useful, it is something good you will get with this camera.

What Are the Downsides to Choosing the PowerShot SX410 IS?

It doesn’t give many options when it comes to resolution – Although its recording quality is not bad, you won’t get many options for different FPS rates. You can only choose between 720p at 25, 5, 2.5 and 1.25 FPS.

As with many cheap cameras, vertical smear can be annoying – This camera doesn’t lack vertical smear when recording video. This is only natural to cameras this cheap. Just make sure you don’t point the camera directly to a light source.

Really poor performance in low light – Make sure you got good lighting for this camera. Its 1600 maximum ISO is below average. Its maximum lens aperture doesn’t help with this either. It will be basically useless at night.

You can’t set exposure manually – You will need to rely on the camera’s auto mode for exposure. This can cause some unnecessary noise to appear in your videos. Nevertheless, if you use it only for vlogging you won’t often miss manual exposure setting.

No touchscreen and WiFi –This is also common in cameras at this price range. WiFi makes uploading videos much easier, just like a touchscreen can quicken the process to configure the camera.

You will have to go the old ways with this camera. It’s just the consequence of its low price.

It has below average battery life (185 shots) – You will probably need a spare battery to vlog comfortably with this camera. This will of course depend on how much time you spend recording. Make sure you try it first before buying another battery.

You can get the the older model, the Canon PowerShot SX400 while it’s still available. It’s basically the same camera for a much cheaper price. You will only miss one thing:

The manual focus. Take into account that since it doesn’t have an articulated screen, it will be harder to make sure you’re being focused during your recording.