Logitech managed to make a cheap webcam that has really high image quality. Nevertheless, there are more things that make the Logitech HD Pro C920 good for YouTube videos.

Webcams are much cheaper than other recording cameras and would be the main choice for vloggers if most of them had better quality.

However, you don’t always need a dedicated recording camera for vlogging; webcams are actually good for channels about software tutorials and gameplays. You normally don’t need to record in 1080p with these channels, so there are many webcams that will work fine.

The Logitech HD Pro C920 goes a little bit beyond that. It can actually replace a more expensive recording camera in some situations.

Why is the Logitech HD Pro C920 Good for YouTube Video Blogging? 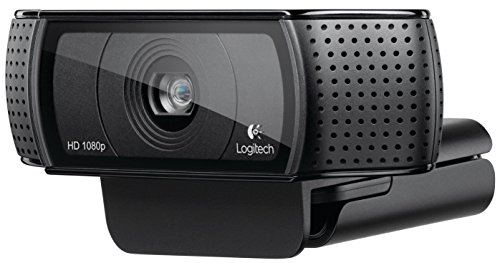 It’s probably the webcam with highest image quality right now – A lot of webcam manufacturers lie about their products’ capability for 1080p recording. However, this one is not lie. Its video quality is far superior than the rest of the webcams out there.

It can also record in 720p and 640×360. These are useful if you want to trade video resolution for more fps.

H.264 compressing consumes fewer resources -This camera uses its own processor to encode video. This means low loading times for your computer.

This makes it a nice camera for gaming, as it won’t consume resources from your PC while you play a game. This is something not found in many webcams more expensive than the C920.

It can pan, tilt and zoom in– This might sound to you like something essential for a webcam. That’s true, but there are many webcams out there that can only tilt. However, the C920 can move in any direction you need it to move.

It can also zoom, but it isn’t that good. Refer to the C920’s weaknesses below to learn more about it.

What Are the Logitech HD Pro C920’s Weaknesses?

It doesn’t have a good zoom – The camera can zoom if you install its software. However, it’s not a significant zoom. It has just one step, so some people that bought it for the zoom were disappointed. Remember that, like any webcam, this one comes with a wide-angle lens. Even if you use the one-step zoom, the camera will capture a lot space around you. Some people don’t like to show their whole room when using this camera.

If zoom is really important for you, the C910 has much better zoom.

This leads us to the last downside:

Since it’s a webcam, you can only use a wide-angle lens – Wide-angle lenses are good if you need to record close to the camera, which is why webcams come with this type of lens. However, since it lacks a good zoom, you can only use this kind of image. Your image will suffer from perspective distortion and you won’t be able to show only your head and torso if you want it.