Although fairly pricey, the mirrorless Panasonic GH4 boasts features that beat even equivalent DSLRs for the same cost, making this a beast of a deal. For shooting video, the GH4 is quite the powerhouse and we’re going to tell you why. And the best part? it’s small enough and has all the basic features vloggers need.

The Panasonic GH4 rocks a Venus Engine IX quad-core processor, and along with a 200 Mbps bitrate readout speed, twice the speed of the previous GH3, shooting 4K is nothing but a breeze. And aside from the ability to shoot just UHD 4k, this camera shoots “Cinema 4K,” essentially real 4k (the exact resolution you see in the movie theaters, hence the name), its resolution sitting high at 4096 x 2160 pixels.

With the Cinema 4K, you’re limited by shooting at 24 fps, but with regular 4K, it raises the frames per second cap to 30fps. In Full HD mode, however, 60fps is possible.

For the best video quality possible, the GH4 crops the image to generate a 4K rectangle. This essentially lengthens the focal length of your lens by 17%. The Micro Four Thirds lenses are compatible with this camera and there are many choices of lenses to choose from, from Panasonic lenses to third-party lenses.

Its 2x focal length conversion means that whichever lens you choose to shoot with can double its focal length. For example, if your lens is a 12-35mm (f/2.8) lens, it’s the equivalent of having a lens that is 24-70mm in a 35mm camera. This makes most Panasonic cameras great to use lenses you already have as a telephoto.

The GH4 can record in three formats: MOV, MP4, and AVCHD Progressive. For even better quality, though extra pricey, you can snap on an optional interface unit that Panasonic sells to the bottom of the camera, recording your 4K video to this external device.

The Depth from Defocus Technology (DFD) uses two separate defocused points in the frame to assist in calculating the correct focus point more quickly. Along with an also faster processor and a speedier sensor read-out, the GH4 can focus better in lower light, helpful for vlogging at night or if you lack a lighting setup.

Focus peaking, two zebra stripe views, and control of the cameras luminance scale, all on the 3” variable-angle, touch-sensitive OLED screen, is extremely helpful for vloggers. The variable-angle screen comes in handy when shooting multiple positions, as many mirrorless cameras simply have a flip-up-and-down screen, which is only helpful for single position selfie shot or straight-ahead shot viewing

Its touch sensitivity helps greatly when using the screen for tapping objects to autofocus. There’s even a meter that will change from yellow to green as you go from holding the camera at an angle to holding it completely horizontal. For non-tripod shooting, this makes selfie vlogging a lot easier since you get a visual aid to help you avoid shooting frames that are not completely straight.

For a mirrorless camera, the GH4 comes in a bit big and heavy. You won’t be able to just slide this into your pocket like a lot of other mirrorless cameras. However, along with this is a very sturdy waterproof build, great for traveling and vlogging in rain or snow. It will easily fit in a jacket pocket.

Battery life isn’t spectacular, and with MP4 videos, you’re limited to only 20 minutes of video per clip. Consider shooting in AVCHD to up that to almost 30 minutes. 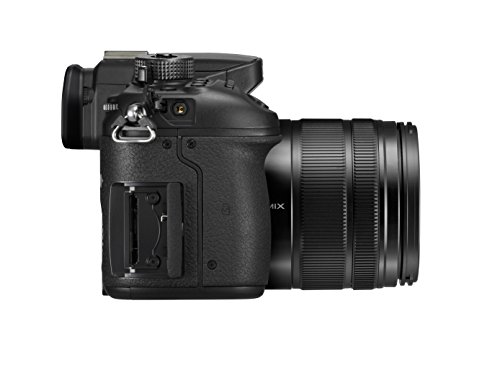 Remote control, NFC, and Wi-Fi availability make this a great vlogging camera for both grounded tripod shooting and handheld shooting. If you don’t use a portable tripod for handheld capture, the camera’s grip is good enough that you won’t absolutely need one (though every vlogger should have this, anyway).

External mic input is available, but Panasonic threw in a bunch of internal mic features such as a three-level Wind Cut filter, as well as a Mic Level Limiter, which acts as an audio compressor in case your audio gets too loud at certain points. Still, for a professional sounding vlog, you’ll want to consider getting an external mic.

Slow-mo and timelapse modes are nice additions but should be nothing less than expected from a camera of this price. The CineLikeD and CineLikeV picture profiles give your video a cinematic look which could set your vlog apart from other vloggers whose videos look more like, well, just video.

Built for the experienced photographer, it comes in at a pretty high price point. I would say for those who already have created lots of daily blog traffic and at least maintain a decent number of subscribers, this would be a great camera to up your game and keep moving forward in the vlogging world.

However, if money isn’t an issue and you want to dive head first into the realm of vlogging, you would certainly be coming into its world with amazing artillery. There are quite a few automatic settings built-in, as well as Creative Filters to aid in easily shooting high-quality video that looks great.