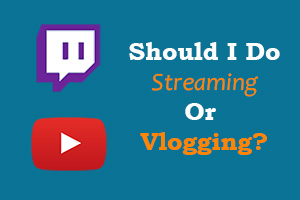 Video content is the type of content with most conversion. Streaming and premade videos are two sides of the same coin with few differences. Deciding on creating a YouTube channel or a streaming channel will depend a lot on what type of work are you willing to put in. Here you will learn to take advantages from them.

The first difference there is between premade video and streaming is that making a video and uploading requires less time.

Even though you could say there is more freedom when you record videos and upload them later, this isn’t completely true. Having a YouTube channel also requires a schedule if you want it to grow fast.

Most YouTube channels that don’t make videos regularly tend to lose subscribers. It’s easy for viewers to find another entertaining or helpful channel. You don’t want this to happen to you.

This is exactly why you need to build a relationship with your viewers, and that’s done by posting videos on a regular basis.

The only way to keep growing followers without making new videos is by having some of your videos go viral. This doesn’t happen all the time, so you need to work hard on creating good content all the time.

You will also need to spend time editing.

Streaming won’t take you much more time than making premade video, but it will really make you stick to a schedule. You will need to set specific time for your live streaming, and you won’t be able to do anything else in that time.

Still, this isn’t the most important difference between them.

What Are the Main Differences When Doing Streaming?

When streaming, you need to interact with your viewers.

Interaction is a huge part of streaming. You need to entertain your viewers and interact with them while giving them value and reasons to come back to your channel.

You can’t forget about your viewers, even if you are amazing at what you’re showing them. This is why streaming is the best way to gain faithful followers, but it’s also really demanding.

To build a successful streaming channel, you will need to do streaming at least 3 days a week on a fixed schedule. This will allow people that like you to know when you’re going to be around. Letting them know that you will be streaming at a certain time is necessary for them to not forget about you.

However, it’s extremely hard to build a successful streaming channel you about something that already has a lot of successful channels covering it.

For example, Twitch offers different categories for streaming. Most of the time, each category will have no more than 5 really successful channels that will attract 80% of viewers on that category at that time. Building a successful streaming from the bottom against those channels is really unlikely.

Then, how can I build a successful streaming channel?

By looking for a category with low competition.

You must choose a space during the 7 days of the week to stream without having too much competition on that same schedule.

When you do streaming, it’s unlikely to be able to cover the subject that you want, be it a game or a skill you want to teach. You will need to have some luck finding that there’s not much competition in your preferred category.

For example, you might want to start streaming about a videogame that was just released. When you do this, your competition will be really low and you will attract most viewers that are looking for streams about that videogame. If you do well, you can become the most successful streaming channel in that category.

Still, it’s not easy to build a successful streaming channel if you don’t have a lot of free time. This is why most people end up going for premade videos when they are just starting.

To Summarize About Streaming

We could conclude the following:

Is harder to have a successful streaming unless you find a category with low competition – Streaming means you need to capture the little audience that is looking exactly what you’re offering at an exact time. Just like TV shows, a more successful show can steal the rating from another one easily. Unless there isn’t many successful channels in your category, it will be hard for you to get noticed.

You build more faithful followers with streaming – Live interaction builds a relationship between you and your viewers. This means more faithful viewers that will come back to your channel at your fixed scheduled.

It might require more time than recording vlogging videos – Even though you don’t need to edit your videos, you will need to stream at least 3 times a week if you don’t want other channels to take your viewers. Being always there at certain times becomes vital. You don’t have the flexibility you have with premade video.

Make a Plan to Start Doing Both

There’s nothing better than going for both at the same time. After all, your video content will still come from your streaming; you will just need extra time to edit it.

If you got the money, you can hire a good editor to do that work for you.

Transferring users from your stream to your YouTube channel and vice versa is the best way to take advantage of the best of both world. If you get to have a successful streaming channel, there’s no reason why not use both methods.

You’ll build a full-time income once you got a channel with a lot of followers and you start to funnel those viewers into promotions, more content and advertising. You start to be really successful once you are able to organize both worlds into the same brand (which is you and your personality).

Of course, it’s not necessary to have both. If you don’t like streaming, just upload videos. A lot of successful YouTube channels, like PewDiePie’s, only upload video.

Streaming can give you a lot, but as with everything else, if you don’t like it, it won’t work. The most important thing is that you do something you like, as you won’t last much if you don’t enjoy it.