The main problem aspring vloggers have is the initial investment needed to do.

That’s why I like recommending cameras around $500 because it’s the best range to find cameras that can record top-quality video for the lowest price.

In this post about the best vlogging camera under $500 you will learn that you can start having good quality for night and day at this price, as the cameras here already bring the highest quality video you can get before 4k recording.

You might not find excellent, or unbelievably good cameras here, but they certainly will allow you to deliver beautiful content to your viewers. 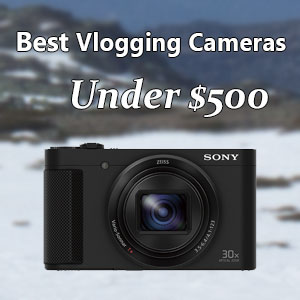 The EOS M100 was one of the first Canon mirrorless cameras ever to be released, and it’s probably the best you can find for less than $500.

What makes this one stand out from the rest of the cameras at this price range is the flip screen, the excellent autofocus, and the fact that it has a large sensor (APS-C).

Canon’s Dual-Pixel autofocus is the type of focus you need for vlogging. The camera can follow your face and keep it in focus with surprising accuracy for a camera this price.

And the APS-C sensor will let you record in low light without losing too much image quality. This sensor is much larger than most point-and-shoot cameras, so you can expect a higher-quality image when you’re recording indoors or during the night.

Also, Canon offers a good variety of lenses, so having an interchangeable-lens camera adds a lot of value to this purchase. It uses the same mount as the Canon EOS M50, which is one of the best vlogging cameras. So you can get this one to get started, and upgrade to the later on M50 and use the same lenses.

One thing to notice though, is the low battery life. Since it’s been a few year since its release, the battery is not as good as the newer cameras. You should take with you a few extra batteries if you want to record for an entire day.

One of the best cameras for vlogs you could get around this price range is the famous Sony DSC-RX100. This was one of the first Sony compact cameras that became really popular because of it’s quality and manual features that allowed photographers take professional pictures without needing a big, heavy DSLR.

The first thing to say is that it is a small camera that is still comfortable to hold. You won’t struggle taking it around, so it’s a good option if you want to be able to take your camera out and record on the go. This is one of the most important things in a vlogging camera.

The image stabilization of this camera works wonders and achieves truly stable video. This is really important for vlogging, and the main reason I can talk about this camera first.

Probably the best thing about it is the lens. The fact that you can get a 1.8f lens for this price is extremely good value.

Additionally, you can make a slow-motion video, since it allows you to record at 60fps. You can choose to record between 60 and 30fps at 1080p. This gives you more options than most of the cameras you will find for a lower price.

Finally, it also has a fully manual mode and RAW shooting, which is an advantage for photographers and vloggers that know how to take advantage of this.

The 2 downsides of this camera is that it doesn’t come with a flip screen and microphone input. However, this last feature is almost non-existent in compact cameras.

Still, this Sony is a great trade for the price and one of the best vlogging cameras at this price range, hands down.

The Olympus OM-D E-M10 is the OM-D line’s offering for beginners looking for an affordable camera. It takes features from its more expensive siblings: the E-M5’s 16 MP four-thirds sensor and the E-M1’s TruePic VII image processor and built-in Wi-Fi.

Its primary selling point is its 5-axis image stabilization, which is already something extremely rare to find in a camera under $500. Although we should take into account this is just for the camera body. You will need to pay over this price to get a lens to work with the camera.

The good thing is that you could get a cheap lens without stabilization.

The E-M10 shoots video of up to 1920 x 1080 at 30p. Enough for casual video shooting but not impressive enough when compared to other cameras on this list which all shoot up to 60p. Another letdown is that the E-M10’s video lacks sharpness with some details being somewhat soft.

The Olympus OM-D E-M10 tries to make up for this with its ability to record footage with video effects such as art filters applied. It has a Movie Tele-Converter filter which enlarges the chosen area in the frame to full size. These features will be particularly useful for daily vloggers that don’t have much time to edit their videos on a computer. Starting the editing process in-camera will surely save you time.

Shooting the same scene using the E-M10 and the E-M5 will yield almost similar results, which is saying a lot since the latter is much more expensive.

Finding a high-quality camera shouldn’t always have to break the bank and the Sony Alpha A5100 proves it.

A follow up from Sony’s NEX series of camcorders and mirrorless cameras, the A5100 mixes the compact body type of previous NEX models with the impressive 24MP APS-C sensor of the Sony Alpha A6000.

This makes the A5100 one of the smallest cameras with DSLR-quality sensors which is great for on-the-go image and video shooting. Its sensor also enables it to shoot relatively well in low-light situations. But it’s also worth noting that there will be noticeable grain when you shoot at ISO3200.

This affordable mirrorless camera boasts off an impressively fast autofocus system. With its 179 phase-detection points and 25 contrast-detection points, you can be sure that your subjects are always in focus wherever part of the frame they may be.

Another great feature that the Sony Alpha A5100 has is its tilt screen which can be adjusted up to 180 degrees so you can monitor what your camera captures while vlogging yourself. This touchscreen also gives you more control with zooming and white balance shifting.

The Sony Alpha A5100’s battery also allows you to get more out of a charge. It has a decent duration for a mirrorless with 75 minutes of footage in one charge.

The Canon PowerShot G9X packs incredible features in a compact and small body. At just 206g, this Canon compact camera is the lightest gadget on this list making it truly pocketable.

It also has the smallest sensor of the cameras listed here. But despite its 1-inch sensor, it manages to exceed the Olympus OM-D E-M10’s 16 MP by about 4 MP more.

The 28-84 mm f/2.0-4.9 lens is pretty decent for the price, as it’s only 0.2 steps away from the G7 X’s lens aperture, which is considered the best vlogging camera. However, it’s still a relatively cheap sensor and moving past the ISO3200 will result in some noticeable grain in your footage.

The Canon PowerShot G9X has a built-in optical image stabilization feature which reduces the effects of camera shake to make sure your footage flows better. Too bad though, this Canon camera doesn’t come with a screen to use in selfie mode.

If your primary concern is portability, then the PowerShot G9X is the way to go. However, if you’d like the versatility that cameras with interchangeable lenses can offer, you’re probably better off with the Sony Alpha A5100 which costs only around $20 more than the PowerShot G9 X II.

While the RX100 offers outstanding quality for the price, you might like this cheaper option that can be a lot more friendly to vloggers, since it does have a flip screen.

Let’s say that this one is just Sony’s offer for people that wouldn’t mind about having a bit worse low-light performance for a cheaper price. The lens is slower and it doesn’t handle high ISO as well.

It can still record 1080p60 video, has stabilization so you don’t get shaky video, but you also get a flip screen to make it easier to record yourself in selfie mode.

This is probably enough if you don’t think you will be recording during the night but also bear in mind that the price difference isn’t that big. If you think you can handle recording without a flip screen I would recommend going for the RX100; it’s just more value for your money.