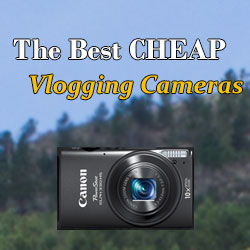 You can start recording videos sooner with a pretty cheap camera that can record 1080p.

Here’s the list of the best cheap vlogging cameras for YouTube so you can start as soon as possible.

Comparison of the Best Cheap Cameras for YouTube Vlogging

Save Money on a Camera, but Spend More on Sound

The good thing about getting a cheap camera is that you should also be able to save some money for a decent microphone.

Most of these cameras don’t come with external microphone input, but you can still get a cheap mic and connect it to your smartphone.

This will drastically improve your audio quality, which is a lot more important than image quality.

You won’t regret considering a decent microphone in your budget before choosing one of these cameras.

Not only that, but thinking about good lighting is also really important, especially when using a cheap camera.

The image quality of these cameras is relative to their price.

This means that, generally, the more expensive the camera is, the better it will record when there’s little light to work with.

Cameras lose quality when there’s no good lighting, so while most of them can record 1080p video, the cheaper ones will lose a lot of quality in low light.

This is just something that happens to every camera in every price range.

This doesn’t mean that the cheapest cameras can’t record at night.

They can, but their results will be a lot worse.

So if you own a cheap camera, don’t try to do many videos at night.

You will need to invest a lot more money if you need to record mainly in low light.

​Why You Probably Don't Even Need a New Camera

Most reviewers out there will simply give you a list of cameras that you can buy so they can get a cut of the sale on Amazon—yes, that's how it works.

But I'm going to be completely honest with you:

If you have one of the flagship smartphones from the past 3-4 years, you're probably better off using it as your vlogging camera.

The value you're going to get from a cheap camera is much lower than what you get from one of those smartphones.

Flagship smartphones are designed with a great camera to justify their high price. And that's fine. So if you already have one of these smartphones, use it.

Just get a power bank so you don't run out of battery and you're good to go.

If not, then you could start with a webcam you have lying around, although most of these are really low quality. Still, there are a few webcams that are really cheap and that can record 1080p just fine.

​I built my audience on YouTube using a cheap camera.

You don't need the best equipment to grow.

It's much more important to have a good strategy.

You can sign up (for free) here. You'll get much more out of it than what any expensive camera can give you.

​But if you still want to get a cheap camera, here are the best ones you can get:

This is the only camcorder I’ve featured here, and I’m convinced it’s one of the best budget video camera for YouTube.

This camera can record for a much longer time than compact cameras and has features that help a lot when vlogging and that can usually be found in expensive DSLRs. I’m talking about a fully articulating screen and an external microphone port.

That is just crazy for the price this baby is selling at.

And you get all of this while still being able to record 1080p60 video. This also allows you to record slow-motion.

Its recording quality is really good and has nothing to envy to higher priced cameras, as long as you record with decent lighting — since it’s a camcorder, it loses a lot of quality in low light due to its small sensor.

The ELPH 360HS has a larger sensor and performs better in low light, but this one comes with so many useful features for vloggers that I still consider it one of my favorite budget vlog camera.

I recommend it as a backup camera to use for outdoor, even if you already have a DSLR for indoors.

Finally, it’s a very small camera that can be carried around without much hassle.

The biggest downside is the lack of wireless connection. However, Canon released a couple of version of this camera that come with wireless and internal storage for a higher price: the R80 and R82. The R80 is still under the 300$ mark and comes with 16GB of internal storage. The R82 comes with 32GB but is a lot more expensive, so I don’t think it’s worth it.

If you believe you can’t record good vlogs for under $200, wait until you see this camera in action —I’ll show you a video below.

What you need to start your Youtube channels is just hit the record button. You don’t need to get the most expensive camera that needs an entire crew behind to work. I’d rather recommend vloggers to get a cheap one they can get right away and start creating content ASAP.

The 360 HS is good not only because it can achieve 1080p video for that price, but also because its microphones are pretty decent.

And what makes them decent is the fact that they are located in the front part of the camera’s body. This allows the mics to pick your voice easier and you won’t cover them accidentally with your fingers while recording.

As you can see, as long as you record with good lighting, this camera will do just fine.

You will see a significant decrease in quality during the night. But if you want the best low-light performance you probably shouldn’t be looking for a cheap camera

For this price, you get a camera with nice audio, resolution, Wifi, OIS, decent autofocus and even manual focusing mode, just in case you need it.

The Canon ELPH 360 HS is definitively the cheapest daily vlogging camera, and there’s no reason not to choose it to start out and see if vlogging is for you.

The Sony DSCHX80 offers really good value to vloggers. It’s just like asking for a camera that has all the basics a vlogger needs and only that, so they can pay less and save on extra features they don’t care about.

Although it is still missing the external microphone port, you can’t ask for much more for this price:

You will get a camera that can record the top resolution before 4k, which will also allow you to play a bit with slow-motion.

You will also get really smooth video while walking thanks to its image stabilization.

Knowing all this, I should mention that its weakest point is audio. It’s not much worse than other cameras on this list, but it’s a shame its microphones aren’t located on the front. This would help vloggers a lot because it picks your voice better and you are not in danger of covering the microphone with your hands while recording yourself.

Its price isn’t the cheapest on this list, but I find it has an amazing balance for vloggers and it still can be considered a cheap camera.

Its performance in low light is not bad, but it’s not the best in this price either. This is not a surprise due to its small size and cheap price.

This camera is one of my favorites for vlogs because of a couple of things:

First, I really like the grip this camera has. It looks like a DSLR but it’s lighter and more comfortable to carry around.

It’s also really good that it can offer full-HD 1080p30 video recording, it has optical image stabilization and a really high zoom. It’s the kind of camera you want to take if you like to record a lot of trips and nature since you will find its zoom really handy in these situations.

The downside to this camera is that it’s a little bit heavier than the others, but it still has good luggability, at least much better than a DSLR.

Also, it doesn’t come with a microphone port, but this is just the norm for this price range.

Finally, this is not so important but I like the looks this camera has. Still, this is not one of the reasons why I consider it one of the best cheap video blogging cameras; the main thing is that it simply offers really good quality for the price.

I wouldn’t recommend it for daily vlogs, but I can see it being very useful for Youtubers that record from home.

GoPros aren’t for every situation, but they are pretty cheap cameras that give you a lot for your money.

This little camera can record crips 4k video with the limitation of having a really small sensor and wide-angle lens.

Used for long periods, the fisheye lens can even make some of your viewers sick, so it’s definitely a camera that I’d use only for what it was made for: sports and action vlogging.

This Hero 7 version has improved microphones when compared to previous versions, and that’s a really good thing.

Still, the mics aren’t located on the front of the camera, so it can still have troubles picking up your voice.

I recommend you to use it with an external recorder or microphone to get the most out of it.

​If you are thinking about getting something a bit more expensive ​or want more options, know that these ones aren't the only good cheap cameras.

​You can find more cameras according to your budget by navigating through the site. Here are some articles you may want to read:

When calculating your budget, remember to save a little bit for your microphone, which is even more important than your camera.

Which is the best camera for YouTube videos under $200?

Hello Bunny, you can check the list here Top 5 Best Vlogging Cameras Under $200

I use Canon PowerShot s120 best of the best