The Canon EOS Rebel T7i is a great mid-range level DSLR for vloggers or really any videographer in general. There are good reasons why the Canon Rebel lineup has been really popular on YouTube for a while. This body comes equipped with a new APS-C sensor and processor. Canon offers the option of two lenses, for an extra cost, of course, one an 18-55mm lens, the other an 18-135mm lens.

The body is compatible with EF and EF-S mount lenses, so if the initial upgraded offerings don’t strike your fancy, you have a huge catalog of lenses to choose from, ranging from Ultra-Zoom to Super Telephoto lenses. Canon has quite the sizable library for whatever type of lens you need. 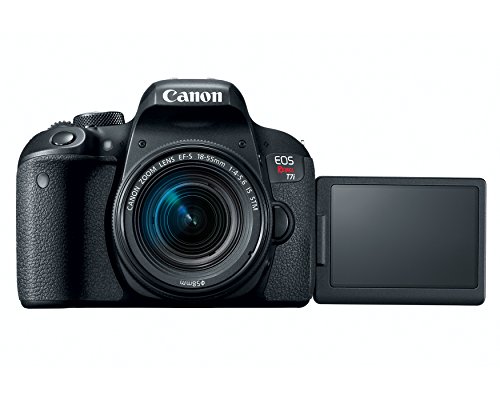 The T7i is the first camera in the Canon line of Rebel products to use their proprietary Dual Pixel Autofocus feature, which is a sensor-based AF technology. It’s a great looking auto-focus for shooting video, keeping subjects in focus during movement extremely well.

The T7i misses out on 4K video, though, but it’s still able to shoot 1080p at 60fps with a max clip length of 29 minutes and 59 seconds. 4K isn’t absolutely necessary if you’re uploading to YouTube, but it is a shame that cheaper cameras like the Panasonic G7 come with it but this one does not.

Optical Image stabilization works pretty well. Movie Mode functions include auto-exposure as well as auto-ISO speed being set automatically within the 100-12800 ISO range, based on your environment.

However, video over 1600 ISO seemed to be a little too noisy to consider it video professional grade quality. So, if you shoot in a lot of low-light conditions, perhaps consider a different light source or maybe think about a mid-range DSLR, like the Canon EOS 80D. You do want your vlog to look professional, right?

You can choose to go full manual while shooting video if you want though, which is cool if you like complete control over your video. The only setback when using manual exposure, however, is that it’s just slightly, audibly noisy. This can be remedied by setting the exposure via the touchscreen, though, so it’s not really any issue as long as you don’t mind using the LCD screen.

One of a Kind Features 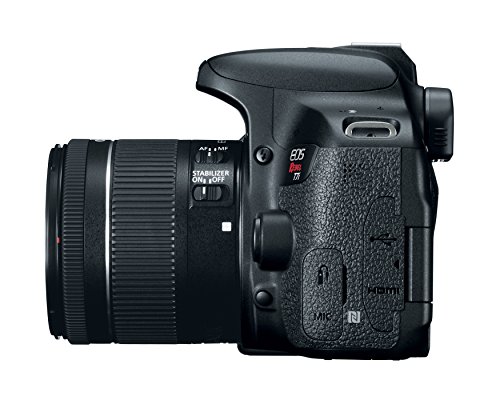 One feature that really makes this camera unique is its HDR Movie Mode. Essentially, what it does is capture two HD frames at a time, one with normal exposure and one with under-exposure, at up to 60fps, then during playback, it composites them together at 30fps to generate a movie with a longer-appearing dynamic range.

The 3” LCD screen is fully articulated, allowing the screen to tilt out to the side and then swivel 180-degrees in either direction. This is a great function for vloggers who prefer to shoot in an array of different positions. The versatility of a fully-articulated screen is not something that many cameras have at this price point.

The screen features Canon’s Clear View II Coatings that will help prevent smudges on the screen. When it comes to reflections though, the coating is not a help whatsoever.

And along with the screen being fully articulated, it also offers a view called Final Image Simulation. During shooting, the image displayed on the screen will automatically show the effects of several different settings. Some of these include:

Another cool feature of this camera is its in-camera time-lapse mode. Outputting at 30fps, you can shoot for up to 120 seconds at a time. Time-lapse videos are great for vlogs, as they are extremely engaging visually and can make for good transitions between segments. 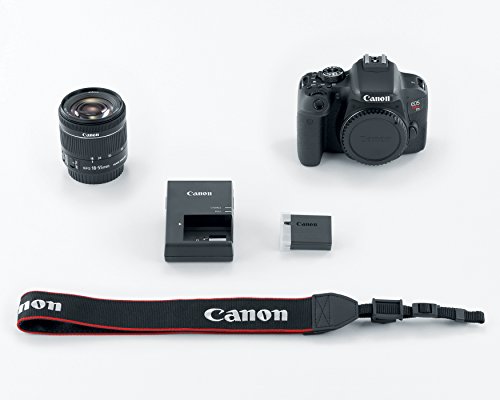 When vlogging on the go, it can be nice to have a camera to just slip into your pocket, and this is where the decision to choose between a mirrorless camera and a DSLR comes into play. They’re both different beasts and when choosing a DSLR, you know it’s going to require a bit more carrying space.

The size of this camera is just a bit smaller than other DSLRs, which is a benefit if you plan on traveling with other gear such as a tripod and external audio gear. Once the equipment starts adding up, a few ounces and centimeters here and there tend to add up. Weight wise, the T7i is just a little over a pound, which is about normal for mid-range DSLRs.

Its battery life is fairly good; nothing to complain about here. Don’t be surprised if you get 3 hours of high-resolution shooting without a recharge. This is a camera you probably won’t need extra batteries unless you are going on an extremely long trek far from a charging source.

One thing that bugs me about many cameras for vlogging is the lack of an external mic input. As consumers continue to reach for better headphones, the audio of your vlog can’t afford to suffer from tinny or hollow vocals. Fortunately, the T7i has one and alongside that is a composite video-out port.

Along with Wi-Fi, NFC, this camera also boasts Bluetooth, which I think is a pretty neat feature. With a Bluetooth remote you can shoot video far from the camera. There’s also a mini HDMI port on the left side for playing video straight to a monitor or television.

For a mid-priced DSLR, the Canon EOS Rebel T7i has some great features that most cameras of its kind don’t. Although it doesn’t allow 4K shooting, there’s not much to complain about with this piece of equipment. It’s a solid buy for any vlogger, from beginner to advance.