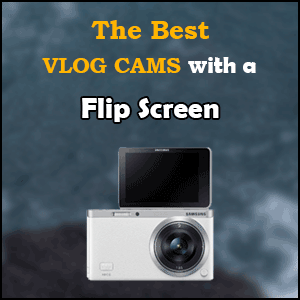 As a vlogger, I’m sure you’ve asked yourself:

How could someone record themselves without a flip screen?

That’s like taking a selfie with your phone without a front camera. Awful!

Articulating screens let you make sure everything is A-Okay while you record.

This is why I’ve compiled a list of the best cameras with flip screen, and have been keeping it up-to-date for the last 3 years. Check it out:

**Disclaimer: As an Amazon Associate I earn from qualifying purchases, at no extra cost to you. To help you decide what's the best product for you, I talk about their downsides and give an unbiased review.

​Don't Read Any Review Before Answering EACH of These Questions

If you really want to make sure you will be happy with your choice, you only need to answer the following questions.

​And if you still don't know if you need a DSLR, mirrorless or point-and-shoot after answering these... just go for a mirrorless.

They are both good for low light and for carrying around.

They are the perfect middle ground and are generally good for any kind of vlogging channel you plan to run.

That will be our only little cheat secret.

I’ll order this list by brand, but know that this doesn’t mean one is better than the other.

The one you choose will depend on your needs.  These are all excellent cameras.

The Powershot G7X Mark II has been the go-to compact camera for vlogs since its release.

This is an improved version of a small camera that already looked like made for vlogging. Compared to the G7 X Mark I, this one is faster, has better performance in low light, more battery life and a new rubber grip.

I’m normally very skeptical when it comes to new versions of cameras that are already good, as I often feel like they perform almost the same and it’s just an excuse from the brands to sell them at a higher price, but I was wrong with this one.

What made the G7 X great was his almost given-for-free lens. It’s a fast f/1.8 24-100mm lens that can zoom out enough for you to record yourself while holding the camera and that can also zoom in enough to get rid of perspective distortion when using it at home on a tripod.

That’s the main feature, but it also offers many more advantages, for example:

Its quality in low light is basically the best you could achieve with a 1’ CMOS sensor camera.

It’s also responsive and has a fast, accurate autofocus. Its flip screen is also a touchscreen, so you can actually change its focus point with the tip of your finger in the middle of a video.

It also comes with time-lapse recording mode, which was lacking in the first version (although it’s still achievable in the older model).

The quality of this camera —especially its lens—, its reliable auto modes and its fully manual mode make it possible to record high-quality vlogs without having to carry around heavy equipment.

This version doesn’t get rid of all the problems the G7 X has, although it does improve a lot its battery life. The main downside is that it still doesn’t have a mic input, but that’s just normal for compact cameras.

I still don’t think The G7 X Mark II it’s worth if you already have the G7 X because it is pretty expensive, but if you’re upgrading from a cheaper camera, it’s better to just go for the Mark II. 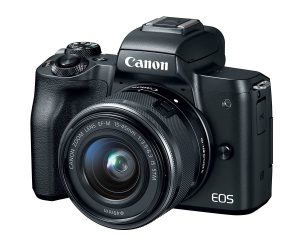 Despite being a newcomer in the scene, the Canon EOS M50 has been getting very positive reviews from the vlogging community.

Although marketed as a beginner upgrade from phone photography and videomaking, it truly has everything to become the new best vlogging camera.

Released in March 2018, its popularity and hype stems primarily from its 4K video shooting capability, being Canon’s first entry-level mirrorless camera with this desired feature. But be warned though, the Canon EOS M50 adds an extra crop factor of 1.7x when shooting 4K on top of its 24-megapixel APS-C sensor’s 1.6x crop factor. So, you’ll get a relatively smaller coverage area.

But despite this minor hiccup, the Canon EOS M50 still proves to be a great vlogging camera for those looking for a gear upgrade from any compact camera.

It can also be a decent upgrade from the Canon G7X Mark II. After all, they have similar capacities but this mirrorless seems to offer a lot more for a slightly higher price: microphone jack, much larger sensor that achieves better results in low light and interchangeable-lens capacity.

For one, its sensor allows the camera to have a wide sensitivity range (ISO 100 to ISO 25,600). And sporting Canon’s new DIGIC 8 processor, the M50 features an improved autofocus system of 143 AF points which can also be manually-controlled through its flip-out touchscreen.

Read the full review and comparison with the G7XII: Canon EOS M50 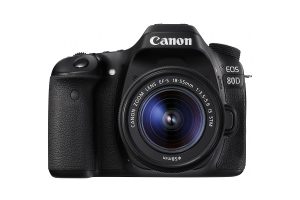 If you are a follower of the most important Youtube channels in 2017, you probably have noticed that most of them still use a DSLR.

Content creators like Casey Neistat and Jake Paul still seem to prefer this kind of camera to give their vlogs the most quality.

The truth is that DSLRs aren’t dead yet, and there are still quite a few new models that have excellent performance for vlogger despite their size.

Between DSLRs, I believe the best one for vlogging is the Canon EOS 80D. The main reason? It has amazing autofocus for video, a flip-out screen, great battery life, and of course, external mic port.

This year model comes with a new sensor and processor that improved the image quality over its predecessor, the Canon EOS 70D. It is also not too heavy, so it is a good option to take advantage of a DSLR without having to deal with their size disadvantage.

If you get a gorilla pod to go with it and a good 24mm lens from the huge selection Canon offers, you will certainly take a lot of advantages from this camera. 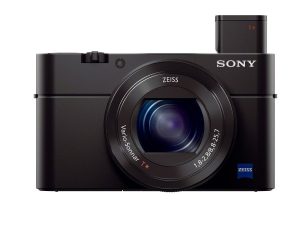 This camera is the main competitor of the Canon G7X Mark II. It is also a daily vlog camera, but this one is a bit more powerful—and also a lot more expensive.

It can record 4k video at 30fps and can achieve extreme slow-motion videos in 1080p with 960fps.

It also has the ability of achieve more realistic colors than the Canon G7X out of the box. This lets you record and upload your video without having to do any color grading, which can be annoying for newbies.

But, it still isn’t better than the Canon in every way.

For example, its autofocus it’s still not as reliable, although it is faster—it still is a lot better than the Panasonic LX10’s.

It also tends to keep the exposure a bit low in high-contrast lighting, but this can be overcome by using the exposure compensation function.

Finally, it has a bit lower battery life than the Canon, but both suffer the same problem of low battery life, so it’s advisable to get additional batteries for both of them. 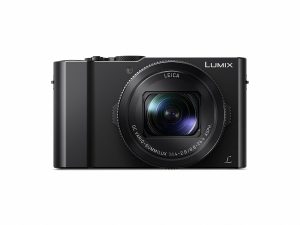 For vloggers, one of the most important models to consider is the Panasonic LX10.

It is a close call when you compare it to the G7X Mark II, since this one offers what it seems, on paper, a faster lens and better (4k) recording quality.

The 4k recording is really good. The camera achieves beautiful colors and can record 4k clips for 15 minutes straight without overheating. This is a really good performance demonstration, but there are also some other things that the G7X does better.

For example, the G7X comes with better image stabilization, so it achieves less shaky image. And it also has a better (although not perfect) autofocus. The camera also performs better in low light, as its lens stays faster as you use the zoom when compared to the LX10.

This is what you’re trading for going for the LX10 instead of the G7X; basically a more stunning image with incredible colors, for a slightly worse performance overall. 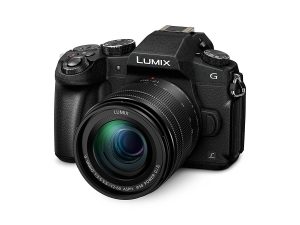 Panasonic doesn’t make many cameras, but the few ones they got are a really good fit for vlogging. The Panasonic G85 is my favorite from them when it comes to vlogging cameras. This one simply has all the additional features vloggers love.

We could wrap up this camera by simply saying that you will sacrifice a bit of low-light performance in exchange for being able to connect an external mic to your camera, and 4k recording quality.

This is really comfortable for vloggers since that’s one less step you’ll have to go through during the editing process. There will no need for you to sync audio and video if you want to have the best audio quality. Additionally, you will be able to set a shotgun microphone on the hot shoe of the camera, which combined with a gorilla pod will be the perfect vlogging setup.

The low-light performance will suffer a bit, together with the ability to achieve the “blurred background” effect some vloggers like to have. This is due to its sensor size being a Micro Four Thirds, which is slightly smaller than the APS-C found in most mirrorless cameras.

But if you are a vlogger, you will probably record mostly outside your house, and an MFT sensor is more than enough for that. This is the way Panasonic can give more features to buyers: by freeing space with a MFT sensor.

Still, remember that you can record 4k video at 30fps with this baby. This is definitely a really good trade for vloggers, and that’s why I can’t leave this post without mentioning this camera.

The GH5 doesn’t have the typical advantage you can find in a mirrorless. The camera is actually just as heavy as a DSLR like the 80D, with only 5g less on his body.

However, this camera is becoming really popular between Youtubers. And for good reasons.

It isn’t exactly the choice for your camera to vlog with a selfie stick as it’s also quite big for a mirrorless, but the 4k video at 60fps is absolutely stunning.

The camera achieves beautiful colors, and has a really wide Dynamic range that makes it useful for any high-contrast situation.

If you are strong enough to carry this camera with a selfie stick, you will greatly appreciate the Dual I.S. function.

This is basically the ability of using the internal image stabilization together with the optical stabilization of some lenses. You will need one compatible lens to use this function.

This makes the camera achieve the smoothest image without needing a steadycam.

On the downside, besides being a bit heavy for a mirrorless, it’s also a Micro Four Third sensor, so it can’t compete with cameras like the Sony A7S II for low light.

But to be fair, this camera does just about everything else better and it’s easier to use—thanks to its user-friendly menu and layout—than most full-frame cameras.

Who's Behind This Site?

Welcome! I'm Will, I'm YouTube Certified and also a YouTube partner that's been building audiences for a living for the past 5 years. I want to help you generate income while creating videos that you love so you can choose the life that you want. Click on the menu YouTube Income at the top if you really want my help with this :)