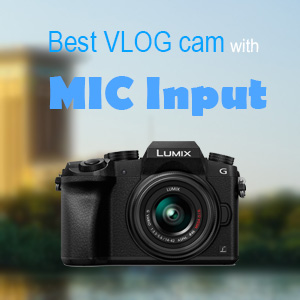 As a vlogger, having a way of recording high-quality audio with your camera is priceless.

Not having to sync audio to video can save you a lot of time. In the end, it will basically make vlogging easier for you.

That’s why I’ve curated this list of the best vlogging cameras with an external microphone input.

**Disclaimer: As an Amazon Associate I earn from qualifying purchases, at no extra cost to you. To help you decide what's the best product for you, I talk about their downsides and give an unbiased review.

Before the reviews, two important things:

First, all the mirrorless cameras you’re going to see here are interchangeable-lens cameras. If you want to save money in the long run —you will be end up paying more today, but you’ll get a lot more quality from your cameras save yourself a lens upgrade—read my article about lenses.

Secondly, here’s a list of good microphones for vlogging. Some of them are perfect for these cameras since you can connect them to their external input. It’s one of the most visited and commented articles on this site, so make sure to go there to check some good mic prices.

Recently launched last March, the M50 is Canon’s latest mirrorless camera, and it seems like it was made for vlogging. That’s why we believe it’s the best vlogging camera.

Although its most hyped feature is its 4k video shooting mode, the big selling factor as a vlog camera is that it also offers everything else you need to record a vlog: flip screen, external mic input and the maximum lightness possible on a mirrorless APS-C camera.

Also, the M50 is equipped with a 24-megapixel APS-C CMOS sensor which enables it to capture quality footage in a variety of lighting conditions especially low-light situations. Meanwhile, travel vloggers will find its five-axis digital image stabilization system quite adequate in handling camera shake when your shooting.

Just bear in mind that the digital stabilization can be used only in 4k mode. You can also combine this stabilization with your lens’ optical IS, so you can get an incredibly smooth image in 4k with this camera.

The M50 is also the first Canon camera to sport the brand’s new DIGIC 8 processor which enables the camera to have a better autofocus performance than the cameras before it.

There’s almost nothing else we could ask from a vlogging camera.

The Panasonic G95 is probably the best choice for most vloggers if you have the budget.

It’s a micro four thirds sensor so it’s not the best for low light, but it will be more than enough as long as you don’t record in total darkness.

The camera was made for video and because of that it comes with flip screen, external mic port and image stabilization.

This latter feature will let you choose any lens without optical image stabilization. This will let you save money in the long run.

What bad thing can we say about it? Pretty much the basic things mirrorless lack: battery life.

For the rest, you won’t find much to complain about it, especially when you take into account the price.

It is not the lightest mirrorless, but it’s at a pretty decent size and weight for carrying around and will deliver the best image quality you can buy for the price.

Alternatively, you can check the previous model, the Panasonic G7, which is a bit cheaper due to the lack of in-camera stabilization. It’s still a nice option since the kit lens comes with optical IS so you can get away with a camera just as good for a lower price.

The Panasonic Lumix GH5 is one of the first mirrorless cameras in the Four Thirds camera lineup to capture 4K-resolution video.

The Gh5 has quickly become one of the best choices for Youtube in 2017. It is kind of heavy for a mirrorless, but it can achieve stunning 4kp60 video.

And even better, it has great image stabilization and a wide dynamic range. The colors are beautiful and has a bunch of features that make it great for both video and photography, but especially for the latter.

As any other mirrorless, its battery life is not the best, and as a Micro Four Third sensor camera, it is not the best fit possible for low light. However, as long as you’re not recording in the night with complete lack of lighting, you will be able to achieve as good as image quality as money can buy right now.

It was only in February 2016 when Sony introduced the A6300 as one of its APS-C E-Mount flagship. Few months down the line, the company has announced the new model, the A6400. This new model is a modest evolution of the prior model the A6300, though it does sport some tempting new features.

This camera is probably the one I will be recommending to vloggers, but there’s a catch

There are some few changes on this new model that can have big implications vloggers will interact with it. Here are the features:

The 4k quality is comparable to other much more expensive cameras, and the autofocus is probably one of the fastest and accurate in the market.

However, the only real downside to this camera is the lack of internal image stabilization.

Its weak point against the Panasonic featured here is exactly that. You’ll need a lens with OIS if you want to take the camera with you and record as you move.

On the other hand, its strong point against the competitors is the fact that it’s even lighter and even though it has an APS-C Sensor.

This will make it better for low-light recording, and also to achieve that beautiful bokeh (blurry background) effect that we all love to see.

If you are the kind of vlogger that record everything you do, you will most certainly want a camera that can perform in any situation, even if you happen to be in a situation where there’s no lighting and it’s completely dark.

The Sony Alpha 7 III is the best vlog camera for low-light recording, and it’s in general one of the top cameras for this job.

Sadly, it is lacking a flip screen, but as a full-frame camera, and by using a selfie stick and a wide-angle lens you will not have to worry about getting out of the frame.

After all, this camera can deliver top 4k quality and really smooth video with its 5-axis in-body stabilization.

And it comes in a package that is much easier to carry around than other mirrorless like the Gh5 and any DSLR in the market.

It’s not a coincidence that a lot of the top vloggers are using Sony Alpha cameras for their work.

But the best thing about getting this camera is that its full-frame lens will allow you to achieve the best bokeh (blurry background) effect you can create with a camera.

This will give your channel an amazing professional look that is almost unbeatable.

Too bad it doesn’t come with a flip screen on top of that.

Perhaps one day we’ll have it all?

If you don’t want to use your main camera to go out a lot and record trips or daily vlogging, you are probably better choosing a dSLR.

The Canon EOS 90D is a DSLR made for video. The camera is made to have the most reliable autofocus you could buy for the price and comes with a new processor a sensor that achieves better image quality.

Although it doesn’t come with image stabilization, there’s a huge selection of lenses with optical stabilization you can choose for it.

This is an APS-C sensor camera that becomes the best option if you want really good low-light recording.

Finally, its battery life has really good capacities; it’s—by far—the best camera on this list in terms of recording duration.

This makes it probably the best choice if you just want to record videos from home, since it’s still a bit heavy.

After Choosing Your Camera, Don’t Forget This

There are several vlog cameras with external mic input that you can consider purchasing to make your vlogging dream possible. The one that I have reviewed above are the latest in the market today. Just keep in mind that the lack of optical image stabilization isn’t a great deal since they are interchangeable-lens cameras. This means you can always get a lens with stabilization should need arise.

Another thing to note is that the Panasonic cameras have a smaller sensor than the Canon M50, so they are not as good in low light as Canon models.

However, this is something you shouldn’t worry about if you use good lighting, so they are still great cameras to record vlogs with.

Who's Behind This Site? 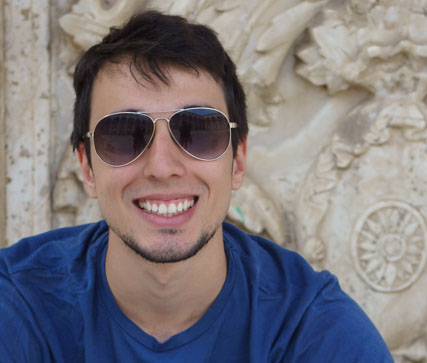 Welcome! I'm Will, I'm YouTube Certified and also a YouTube partner that's been building audiences for a living for the past 5 years. I want to help you generate income while creating videos that you love so you can choose the life that you want. Click on the menu YouTube Income at the top if you really want my help with this :)